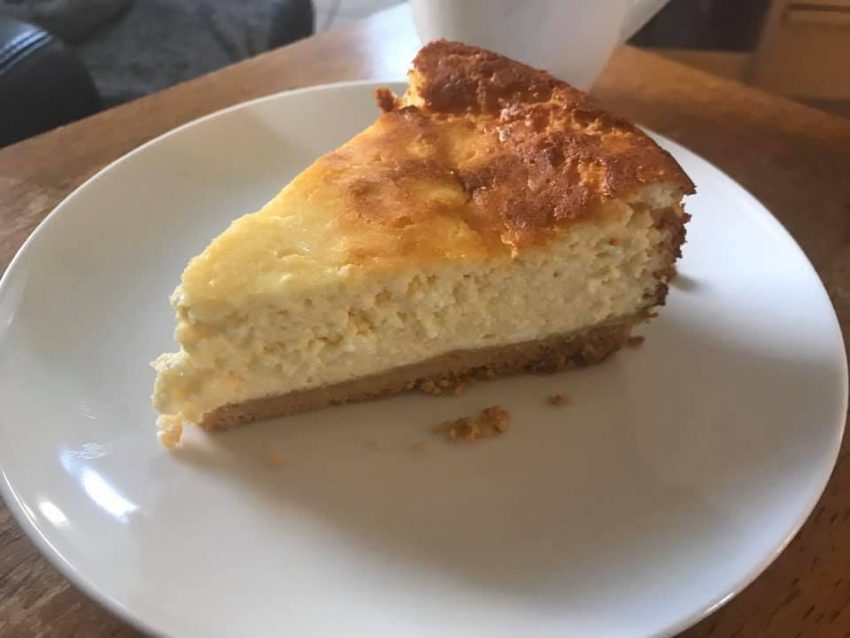 When I first posted this cheesecake on my personal Facebook page, it created a much bigger stir than I ever anticipated! Yes, I know how uniquely wonderful Polish-style cheesecake (sernik) is. But I’m from that culture, so I know of it firsthand. Most people haven’t had experience with it, unless they are from a Polish background.

So I’m not sure exactly what excited my Facebook friends. The photo perhaps? Or maybe because, as I posted this recipe, we were in the midst of the COVID-19 pandemic, and everyone was doing much more cooking and baking at home. Regardless of the reason, I’m glad about the excitement and interest, I’m here to serve, and I’m happy to share the joy of this Polish delight with you!

And Now For Something Completely Different

If you are about to give Polish-style cheesecake a try, I have to warn you — it’s nothing like American-style cheesecake. But in my opinion, that’s not necessarily a bad thing, because everything that makes this cheesecake so different is also what makes it so wonderful.

First, the recipe doesn’t call for cream cheese, the traditional filling for American-style cheesecake. Instead, you have to use a dry farmer’s cheese (known in Polish as twaróg). This is the same cheese that you find in cheese-filled pierogi. It’s also the cheese that’s used on top of a very popular Polish bread, consumed mainly at Easter, called kołacz — a slightly sweet bread that has a dollop of sweet cheese on top, in the center of the round loaf. And, it’s the same cheese that’s used for cheese kolaczki (Polish cookies made with various toppings, including prune, raspberry, and apricot).

Obviously, Poles like cooking and baking with this cheese, and I don’t blame them. It’s delicious. I could eat it right out of the carton, unsweetened. To me, it has a slightly lemony taste to it — a sweet, “bright” flavor — all on its own, even before adding any sugar or flavoring.

Some people use dry cottage cheese curds. To me, that’s really not quite the same as farmer’s cheese. Neither is ricotta. If you absolutely can’t find true farmer’s cheese, you can substitute the dry curds or the ricotta for it, and it’ll be close enough — I suppose. But don’t give up the search too easily. If you have a Polish deli in your area, chances are good that they will carry twaróg.

Next, this recipe backs away yet again from the typical American-style cheesecake by introducing flour, cornstarch, and baking powder into the cheese filling. The addition of these ingredients gives this cheesecake, while dense, an inner “lightness” that’s somewhat spongy and cake-like.

The light texture of the cheesecake is also thanks to egg whites, which are whipped up and then folded into the cheese mixture. The result is a filling that’s probably unlike anything you’ve ever experienced, especially in a cheesecake.

Not Quick Nor Easy — But So Worth the Time and Energy

Admittedly, I’ve bucked my own blog by posting this recipe. I’m all about traditional homemaking with a quick and easy modern twist, and this recipe really is neither quick nor easy. Instead, it’s rather complex, and it’s time consuming.

I’ve had a bad back since I was a teenager, and — wouldn’t you know it — halfway through this recipe, my lower back starts to ache from standing for so long. But I’m getting up there in age, and I have a horrible skeleton system, so maybe that’s just me, and you’ll fare much better. Either way, I did want to extend a cautionary note.

So when you are about to create this cheesecake, be sure to have some extra energy and some time carved out. I’d say to reserve at least a half hour — perhaps even up to a full hour — that you can devote to prepping the filling and crust. And then, plan on another hour for baking the cake. But in my humble opinion, the time and energy you put into this dessert will be well worth the results.

A Hit Even With The Kids

I put this cheesecake through my home “litmus test” — my two kids, both of whom can be rather picky when it comes to food. My daughter, in particular, has a strong liking for all things Mexican — and little else. She’s not big on anything overly sweet. But both of my kids liked this cheesecake — especially the sweet shortbread cookie crust!

A Few Tips Before You Start

I went for years as my family’s cook and baker without a food processor. I finally received one as a Christmas gift a few years ago. I admittedly don’t break it out much, but this was one of the times in which I did, and I found it to be extremely helpful in making the crust of this cheesecake.

Just like American cheesecakes, this cake is best made with a springboard pan. The recipe calls for a 10-inch pan. I actually get away with using a 9-inch pan.

Because this recipe is complex, it call for a number of steps — and a number of large mixing bowls. You’ll need at least three large bowls to pull off this recipe successfully. I like ones that have a “spout,” so that you can easily pour out batters and fillings.

Here’s the recipe! As we say in Polish, “Smacznego“! (That’s the Polish equivalent to bon appétit!) 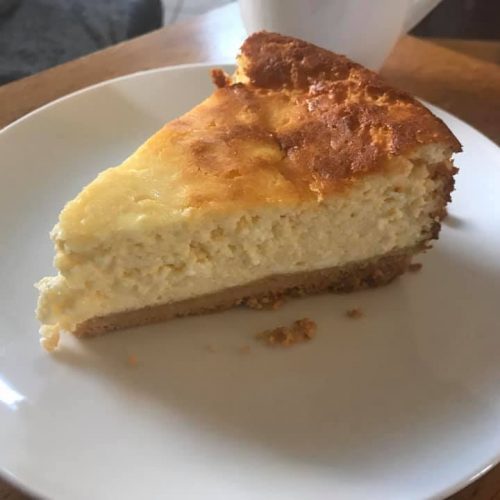 Get It Down Pat Polish Cheesecake (Sernik)