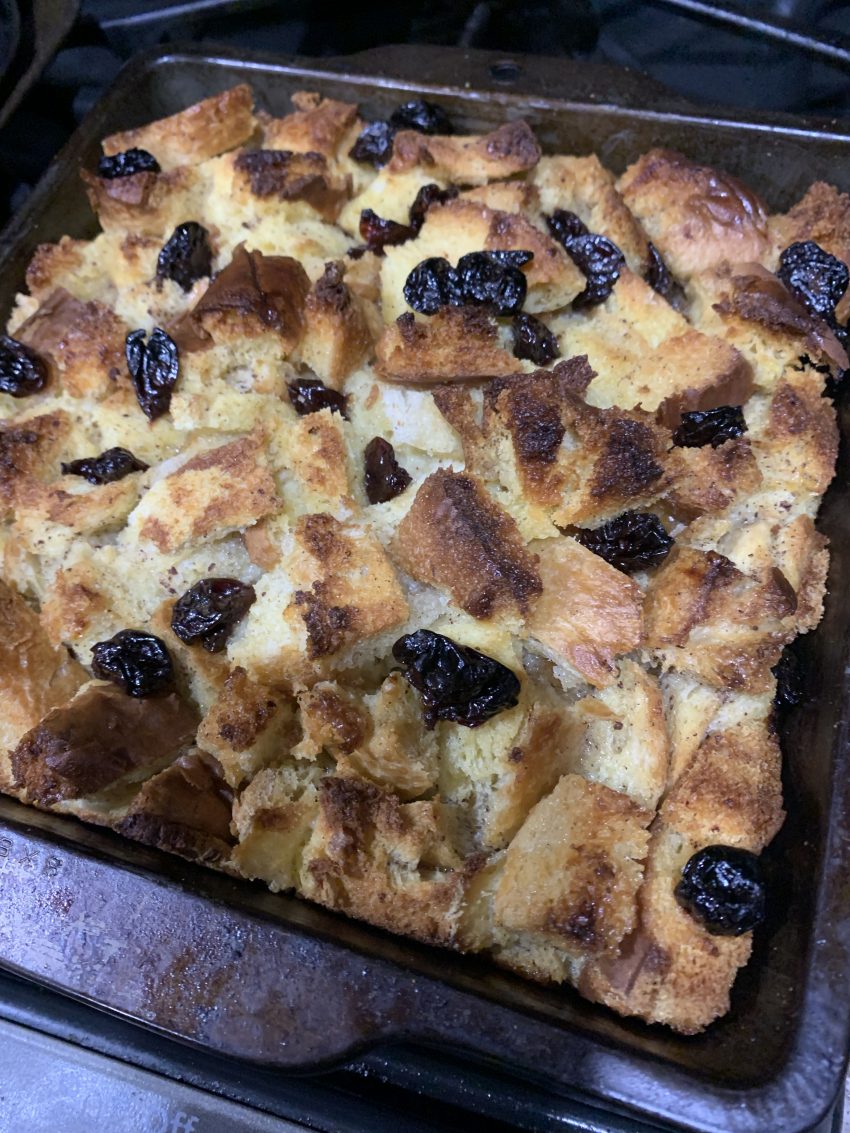 When my significant other first moved in with me, he treated me and my son to a trendy BBQ in our area. Some of the food there wasn’t as spectacular as expected, but two things really stood out for me — their cornbread and their bread pudding. Both were the best I had ever tasted.

Just a few months later, I found myself with a ton of leftover bread and I couldn’t help but remembered that delicious bread pudding. I scoured the internet in hopes of finding something similar. With a few tweaks from me, I created what I really wanted — a bread pudding that would be so quick and easy, I would never waste any leftover bread again!

Its Beauty Is Its Simplicity — But Also Its Possibilities

I love two aspects of this bread pudding. First, there’s simplicity of the recipe. As always, I’m looking for quick and easy things to prepare for my family, and this dish fulfills the assignment. But equally important to me is how easily a recipe like the one for this bread pudding can be altered.

It can be SPIKED with alcohol (as was the version I loved from the BBQ restaurant). It also has a GLAZE which also can be spiked. I chose to spike the glaze, and leave the bread pudding itself sans liquor. That way, if someone in the house wants it without the alcohol, that’s available to them. In fact, I actually make TWO glazes — one with liquor and one without — so that there’s always a version without any alcohol at all.

It also can include dried fruit, or not… And while I’ve never made it this way, I can just imagine how it might taste with the addition of nuts, specifically almonds or walnuts.

So Much Bread, So Little Time

I’m slightly surprised that we had so much unfinished bread in our fridge, but there it was, and here it all is!

I hate to see any food go to waste. And that brings up another great thing about this bread pudding — that just about any type of bread can be used. Now, my own tastes dictate not using anything with a particularly “strong” taste. So had I had rye bread, I probably would not have used it. And I did have some bread with sesame seeds on the crust. I love sesame seeds, but I didn’t want them to randomly show up in this bread pudding. So I did cut off the crust containing the seeds.

But just about all other breads were good to go. I used plain old white bread, sourdough bread, and potato bread hamburger buns to fill the pan.

I also like that, because this dish is so quick and easy, it isn’t so daunting that you are afraid to tackle it at any time on any day. I made this on a day when I was tackling two much more complicated dishes, and it still was easy to “squeeze” into my cooking production schedule for the day.

I used an 8″ x 8″ pan, mainly because that’s all I needed for the bread I had. But I would have loved to double the recipe and use 9″ x 15″ pan, and I think you could do this quite easily with equally great results. The baking time might take longer, but I’ve yet to try it out myself to know for sure. You want the top to be browned, but not so far gone that the dish starts to dry out too much.

As I already mentioned, the simplicity of this recipe allows for a lot of options and additions. For example, I know that raisins are a staple of many bread pudding recipes, but I’m just not a fan. However, I do like dried cherries, and that’s what I used this time around. You certainly could use raisins or a number of other dried fruits. I could see dried cranberries being very tasty! And last time (although not this time), because my cherries were so dried out, I actually soaked them first, to rehydrate them and make them more plump for the recipe.

Booze It Up — Or Not

I like my bread pudding a little tipsy. The version I had at the BBQ restaurant had Fireball Whiskey in it, and it was wonderful. As mentioned, I like spiking the glaze. Last time, I made two boozy glazes: One with Kahlua, and one with Jack Daniels Honey Whiskey. This time I used a liquor I picked up on sale that tastes very much like Rumchata in my humble opinion. It was on clearance — 75% off — and I was extremely curious about it. At that price, I figured, why not? The name of the liquor is Joe Gambino’s Bakery King Cake Rum Cream. I bought it long after Mardi Gras was over, although it showed up on the liquor shelves very much after the fact as well. It went on clearance fairly quickly. I could see enjoying it over ice or making with other beverages including coffee and sparkling water.

Great news! The glaze is as easy (or easier) than the bread pudding itself.

Here’s how it looked out of the oven!

And here it is, covered in glaze and ready to eat. Delicious! Ready in about an hour, start to finish.

Your turn to make it and try it out for yourself! Enjoy!

Get It Down Pat Bread Pudding