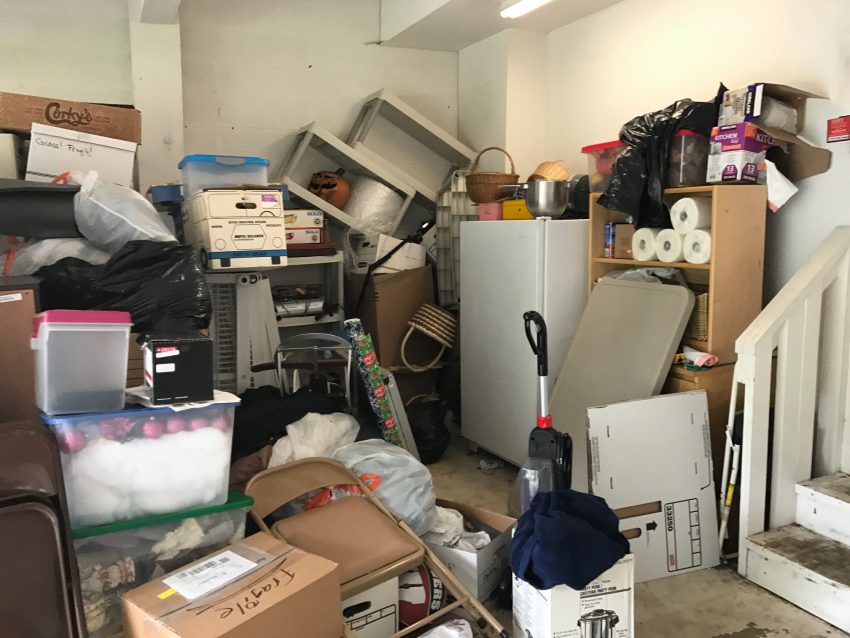 But that’s not where I want to be. I WANT a place for everything! And I want what belongs there to be in that place.

I get a tremendous amount of peace from being in a well-organized space. When I’m in a messy room or if my office area is cluttered, so are my thoughts.

DISCLOSURE: THIS POST CONTAINS AFFILIATE LINKS, WHICH MEANS I COULD RECEIVE A COMMISSION IF YOU CLICK THROUGH A LINK AND THEN MAKE A PURCHASE.
THESE COMMISSIONS ARE AT NO ADDITIONAL COST TO YOU.

PLEASE NOTE: AS AN AMAZON ASSOCIATE I EARN FROM QUALIFYING PURCHASES.

So a while back (more than 10 years ago), I invested in Julie Morgenstern’s book “Organizing from the Inside Out.“ And when it comes to organizing, it has become my BIBLE.

An Organizing Overview — Plus Necessary Specifics

When I bought the book, I wasn’t completely ignorant of Julie and her method of organizing — thanks to Oprah Winfrey, who regularly had Julie as a guest on her show. But most of Julie’s advice didn’t register strongly with me until I actually bought her book.

What I like most about the book is two-fold: I like how well Julie breaks down her method, and I also like how she applies it in very specific ways, room by room.

The book first introduces you to the overall concept of organizing, as well as to why you might be having trouble with that. I’ve always been a fan of getting down to the root cause of a problem, so doing that first means a lot for me, personally. Better to come up with a cure, rather than only dealing with its symptoms!

Next, Julie tackles the specifics, room by room and also beyond to things that you might not have even thought about — such as accessories and photographs.

Now, before I start to organize a room, I like to read and review her book first before I jump in, and refresh myself with the method and its steps. It gives me the knowledge and background I need to organize a room as efficiently as possible.

A Systematic Method To Organization

Don’t get me wrong — organizing can still be a lot of work, and it still takes time. Julie’s book isn’t the magic wand that makes those aspects of organizing go away. However, one thing I learned when I first started to apply her system is that it takes less work and less time than you might have thought.

Organizing can appear to be very overwhelming, but I think that’s purely an impression. When you apply Julie’s method of systematically reviewing and then either removing or finding a home for each item, it breaks down a lot of that overwhelm. In fact, she has you estimate the amount of time it will take you to attack your clutter. Accurate or not, at least with this estimate, you are up against something concrete; time is no longer just an abstract thought on your head.

Often, you’ll learn that the amount of time you thought the job would take was an overestimate of reality. The plus side of that lesson is this: When you do future organizing, you’ll now be more experienced and knowledgeable about the amount time it will take, you’ll be able to estimate that time more realistically going forward, and with this knowledge, you won’t feel so fearful and overwhelmed.

Your attack on the clutter is broken down by Julie into five simple steps: 1) sorting, 2) purging, 3) assigning a home for the item(s), 4) containerizing, and 5) equalizing. “Equalize” is Julie’s term for maintenance — and I’ll admit that I still have trouble with that. I don’t blame the author for that; she discusses fully after every section how to maintain each area. That’s purely on me. I suppose maintenance is not as “exciting” and interesting as the overall organization project itself — which I do have to admit has an ending that is immensely fulfilling.

But ignoring maintenance is a big mistake on my part, as it requires me to revisit big organization projects again and again. I will say in my defense that I’m getting better at maintaining the spaces of my home as time goes by. I also have older children now who don’t make quite the mess they used to make, and that’s playing out in this home’s favor too. And of course, thanks to downsizing, there’s less space now. I’ve always found it easier, for the obvious reasons, to keep a smaller place clean and tidy (and I have an easier time decorating small spaces, too).

My other personal problem — beyond not having “homes” for my stuff and failing at maintenance — is being able to let go. First, let me make it clear: I’m no hoarder. When I was younger, my mother used to praise my ability to look at a letter when it arrived, analyze it, and if it was worthless, immediately throw it out. She was comparing me to my father, who she said had a much harder time doing that.

Ironically, I recently had to deal with a lot of letters — a big box full of letters — that my father sent his family when he was stationed overseas during World War II and never could part with himself. Now his daughter suddenly isn’t so great at throwing away letters either. I’ve since decided to keep them, and they have a special place in my son’s walk-in bedroom closet — at least for now.

Again, Julie doesn’t leave a stone underturned. She not only discusses the problem of “letting go,” she devotes a whole chapter on what’s holding you back. In it, she talks about the various reasons, including psychological ones, that contribute to clutter. Hence the title of her book, “Organizing from the Inside Out.” According to Julie, you have to deal with what’s going on inside of you before you deal with what’s outside of you — because, essentially, the outside is a reflection of the inside.

Yep. I’m still working on that. I might always be. But at least I’m not ignoring the inside. It’s a big part of self-care that I believe we all should apply.

So Much Clutter, So Little Time

I also do wish there were more hours in the day. In my life, there’s so much going on, that I have to prioritize, big time. Sometimes organizing and decluttering make the list of things to do for a day. Sometimes they don’t. During vacations, when I’ve thought I could and would devote myself completely to decluttering my house, there’s always that something that becomes the bigger priority.

Life Is Short. The Mess Can Wait.

I suppose there is a question that always has to be answered, as life is very, very short: How important is doing this particular task at this particular time? Sometimes, it’s just a fact that time is better spent with others, doing enjoyable things, as that moment is all too fleeting. As a Catholic, I can’t help but think of the Gospel story of Jesus, Martha, and Mary. I think this was one of the lessons Jesus was trying to teach Martha when she was cleaning, while her sister Mary (much to Martha’s chagrin) was instead spending time interacting with Jesus. The mess would still be there — but in a very short time, he would not.

But, eventually, I do get to these messes — thank God! My sanity really needs for that to happen. And I’m glad to have my organizing bible to refer to, when that time arrives.

I also like doing things systematically — very step by step. It helps me stay on track. It helps me get things done. I reach my goal! So I really appreciate that Julia’s book is set up in a step-by-step manner. It helps me reach my goal of keeping my home better organized and less cluttered. I can pick a room to work on, select a date on my calendar to tackle it — and then when the day comes, I can start and maybe even finish organizing that room. It’s so satisfying, I can’t even tell you!

A Realistic And Doable Organization System

One area I applied this system to that made an incredible difference in my life was my garage. After downsizing from my dream house, a lot of my belongings ended up in the new garage. It was so full, I couldn’t use the garage for its purpose — to store the cars. That was very frustrating.

Where I live, not having the cars parked in the garage can be a real problem. I live up north. We experience the winter season here. It snows. A LOT. And I decided… NO. I was NOT going to be parking our cars out on the driveway and in the snow that winter.

I applied Julie’s five steps to the garage. It took several weekends — over several months. It took most of the fall season, if I remember correctly. But I managed to do it! Nearly by myself, too. (I did enlist my son for some help with moving heavier things near the end of the project.)

In the end, I got BOTH of our family’s two cars into the garage — less than 24 hours before the first snow of the season! Phew! In the nick of time, for sure!

Here what it looked like before the clean up (the entire garage was filled with stuff):

Here is the garage after I finished (although I should have swept out those leaves before I took the picture):

Now, I’ll admit… there’s still more I’d like to do in there, and there’s definitely more stuff to get rid of as well. But the truth is, without Julie’s system, I don’t think I would have known how to even start. Best of all, I achieved my goal of using the garage as it was intended, by getting both cars in there before the first snowfall! She’s got a section, by the way, just about garages.

If you’d like to apply Julie’s system to your home, you can click HERE and purchase the book for yourself. Attack the clutter — and enjoy the results! Your mind and soul will thank you.